The digital chapbook issue of the always lovely blossombones has gone up! It is definitely worth checking out.
Posted by Margaret Bashaar at 9:45 AM 1 comment: 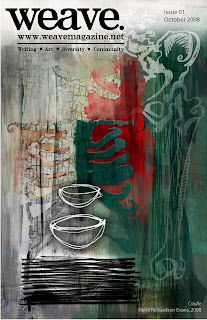 The first issue of Weave Magazine is on sale now! Click on the link or head over to http://www.weavemagazine.net to get your copy today!
Posted by Margaret Bashaar at 7:15 PM No comments:

On (not) being prolific

Barring that embarrassing time in high school when I wrote a poem a day, no matter how horrendous the poem, I have never been a prolific poet. It was a good run when I wrote 6 poems in three months. In fact, it was the most I think I have ever written and been happy with in that kind of a time period.

I could blame my job, my family, my editorial duties, but even when none of those things existed it was very difficult for me to pump out the 12-15 poems I had to write each semester for my creative writing courses, and often what I did write I was not entirely happy with. There were times I was downright embarrassed to bring a poem to class, but I had to in order to hit my quota. I understand the need for a quota, of course, but none of the poems I wrote at the last minute because I had to have seen the light of day since. In fact, most of them never even made it near my senior portfolio.

I've tried different techniques to up my output over the past year or so (it was just unhealthy when my number of poems published in a year exceeded my number of poems written) - more freewriting, changing location of writing, using prompts (boy did that one fail on an epic scale), but the only one that has (sort of) worked has been writing at red lights. I have a tiny notebook and I write in it at red lights on my commute to and from work. For some reason that time in the car is the perfect time for my brain to work on poetry. I couldn't tell you why, but all the poems I have written since August have been written in part while getting honked at when the light has just changed.

This way of writing does mean that I only get a line or two down at a time, but I'm writing more than I ever have before. It's fun to figure out which lines fit together, to structure poems from the pieces. Maybe eventually the day will come when I write a poem a week, but for now I'm just happy to have my red light poems.

And because it fits, stolen from the lovely Mary over at The Word Cage:

2. What was its title? - After the Cold Snap

3. What was one image from the poem (if applicable)? - tying knots in curtain tassels

4. Do you currently have a poem percolating in your brain? - yes!

5. If you answered "yes" to number four, what is one image from that poem? - a butterfly pinned to wax

1 point for each response. Partial credit available. No penalty for attempting. This is an open book test.
Posted by Margaret Bashaar at 7:32 AM No comments:

Blogs Off the Island